Hi, I’m Lisa Hildebrant, the pastry cook behind French Kiss. And while I think it terribly gauche, I’ve been convinced to give you a little window into my history. So, with one arm twisted behind my back, and the other at this flour-covered keyboard, I present you with my “bio”.

I was born in Phoenix, Arizona to a citrus farming father and a corporate caterer mother. It was my mom, Molly, that lit the fire in my proverbial oven—or at least she replaced the 1,000-watt bulb in my Easy-Bake oven (aside: how dangerous were those things!?).

By the age of 12, I found myself obsessed with Martha Stewart. And while most of my middle-school peers were lusting after the newest Caboodle, I was plunking down my hard-earned allowance on a subscription to Martha Stewart’s Living. I devoured those recipes like my friends devoured the latest issue of Sassy magazine. 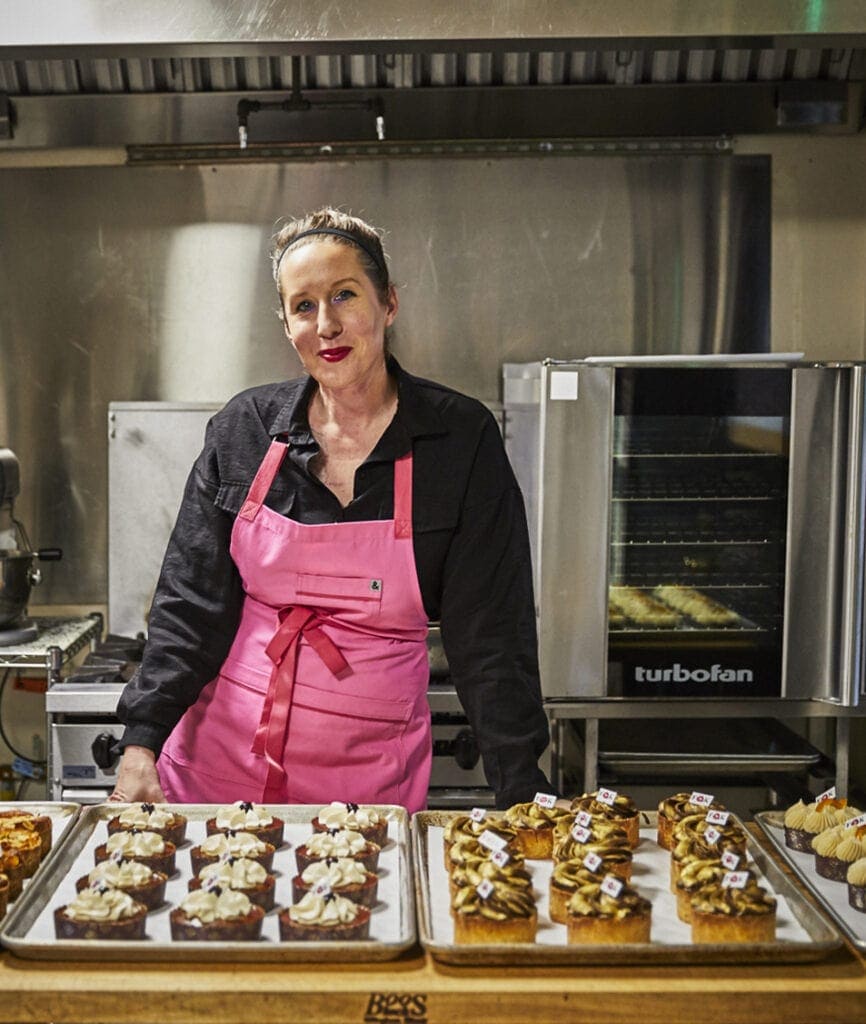 While baking always remained a passion of mine, I ended up pursuing a career in the arts. After earning my degree at Tufts in Boston, I moved to Los Angeles and worked in museums and galleries and focused on my other passion, neon and glass art—all along continuing to bake in my spare time.

In 2008, I found myself back in Arizona, trying to decide what road to travel next. As fate would have it, I was dining at a French pâtisserie in Scottsdale and struck up a conversation with the owner and Chef—a renown Parisian fashion photographer turned pastry chef. One thing led to another and I was staging the next week.

I worked my way through all of the classics, both savory and sweet, eventually graduating to the pinnacle of difficulty: the French macaron. Now, I say “difficulty” because in the Arizona dry-as-a-bone climate, macarons are hard to make. The recipe for making macarons in Arizona simply won’t work in Portland.

After a few years at the patisserie and a solid bit of knowledge under my belt, I began collaborating with a food broker and commissary kitchen where I was doing recipe R&D for big box stores and first-class desserts for major airlines, like KLM. A different world working on such large scale production and tenth-of-a-cent cost considerations, when compared to the “spare-no-expense for quality” of my previous employ.

As fate would have it, I ended up following the love of my life to Portland in 2010, where I worked for a stint as a pastry chef for a gourmet food store before returning back to art in 2012. The 3:30 am wake-up didn’t mesh well with a partner on the late shift. Two ships in the night, and all that.

While founding and running Macchiaroli Art the past few years, I’ve always kept one foot in the kitchen; perfecting my pastry, baking for neighbors, and throwing lavish dinner parties with my husband—who’s a fabulous cook in his own right. Food has always been our love language.

For a long time, I’ve flirted with the idea of French Kiss, but never found the timing to be right. And while this pandemic has been hard in many ways for most, it’s presented a window of opportunity for me to give this a go. Several months of recipe development later, I’ve found a commercial kitchen, received my blessing from the Oregon Department of Agriculture and have birthed French Kiss.

My goal? To spread love and joy through pastry in my home, Portland.